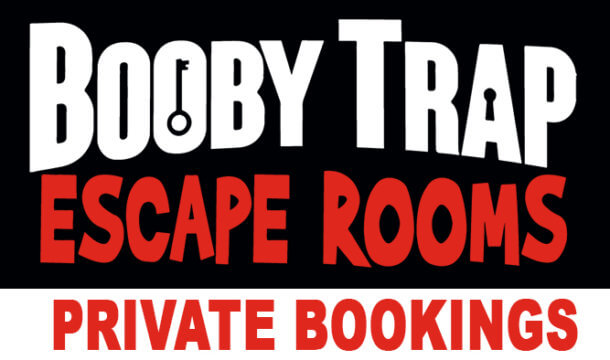 Escape the Ordinary!
Booby Trap Escape Rooms offers a fun and interactive critical thinking adventure for you and your friends or family! Your group will be left in a room for 60 minutes with nothing but your teamwork skills and brain power to help you complete your fully themed mission! Booby Trap Escape Rooms provides a fully immersive experience with high tech features to keep you entertained from start to finish. Escape the ordinary and visit Booby Trap today!

Our Rooms-
Pharaoh’s Revenge:
You’re part of a large archeological dig team that’s looking for lost artifacts in the Egyptian desert. After returning from a supply run, you realize your team members sick. It’s up to you to figure out what caused this sickness and help the team before it’s too late. Solve puzzles, break the curse, save your team!

Singularity:
Your spaceship is old and rusted. Beneath the rough exterior is a nuclear reactor that provides almost limitless power. The core of the nuclear reactor is leaking. Your team doesn’t have much time before it detonates. It’s up to you to fix the reactor before it’s too late.

Mayday:
It’s business as usual for the crew as your submarine sets off for another adventure. But everything changes when the captain calls “Mayday” and chaos erupts on the bridge. Is there a leak? Are there mechanical malfunctions? Repair the submarine before it’s too late!

Inventor’s Workshop:
I regret to inform you that Worthington, a famous inventor, passed away last night. Near the end, he became consumed by the fear of dying. He didn’t want his years of work to fall into the wrong hands. He thought you were very capable of continuing his own work. In order to do so, you must find his will before the bank arrives to seize control.

Check out other coupons and specials for more great offers you won't want to miss, exclusively from Dells.com!