Happy Halloween everyone! To celebrate the spooky holiday we wanted to share some of our hometown ghost stories! Be prepared, several of the stories may give you the goose-bumps! 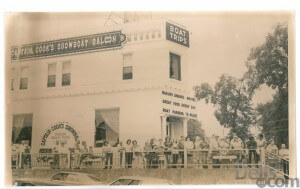 Just past the downtown bridge is the 100-year-old Showboat Saloon. Known for their friendly atmosphere, on-tap beer, live music and free bacon Thursdays, few know of Showboat’s supposed supernatural happenings, believed to stem from a past resident. Molly, a previous renter, enjoys opening and closing doors and fiddling with appliances in the upstairs apartment. In fact, reports of her appearances and strange events became so regular that the current owner has decided to no longer offer the upstairs apartment unit to prospective renters. While Molly tends to hang out in the upstairs area, reports of strange activity in the main-floor bar have also surfaced. Reports of human forms in turn-of-the-century garb have been seen in mirrors and a strange voice has been heard repeatedly in the stage area. Next time you’re in the area, stop in at Showboat Saloon and do some ghost hunting of your own (with an icy cold beverage of course)!

Spring Grove Cemetery is the final resting place for Maria Isabella “Belle” Boyd, a notorious teenage Confederate spy. Born and raised in Virginia, Boyd was known to flirt with Union soldiers to aid the Confederate generals with insider information. The Union soldiers and press dubbed her “La Belle Rebelle,” “the Siren of the Shenandoah” and “the Rebel Joan of Arc”. Boyd delivered crucial information to General Thomas “Stonewall” Jackson to help lead the Confederates to victory at the Battle of Winchester. After the war ended, Boyd traveled the world sharing scandalous stories of her spy endeavors. Boyd arrived in Wisconsin Dells to give a speech to veterans of the Union Army on June 9th, 1900 and was found dead two days later having suffered a fatal heart attack. Her grave site (compiled with stones from each of the Confederate states) can still be seen today at the Spring Grove Cemetery. It is said that her ghost still wanders the paths of the cemetery. 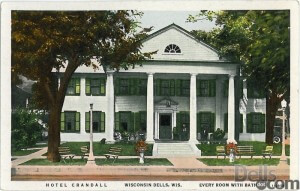 Keep your eyes and ears peeled if you are on the 800 block of River Road. The 800 block was originally home to the Crandall Hotel. The hotel was an extremely popular tourist destination due to the proximity of railway transportation. The Crandall Hotel burned to the ground on one of the coldest nights in 1974. Several firemen were treated for frostbite and the fire hoses had a hard time battling the blaze with temperatures falling to 8 degrees below. Ghosts of previous guests are said to haunt the 800 block where the hotel once stood.

The Dell House… Not So Happy Hour

Known for shenanigans and hooligans, the Dell House had a reputation of being a fairly vulgar and churlish establishment. Located near the Narrows of the Wisconsin River (close to the tip of Black Hawk Island), the Dell House was designed to cater to the river men’s basic needs; a place to eat, sleep, drink, gamble and find women. Fights were fairly common among Dell House visitors (as you can imagine), and it’s rumored that several of the rough brutes have a final resting place in the murky bottom of the Wisconsin River. The Dell House site was abandoned when the river traffic diminished and burned to the ground in 1899. Nearby campers said to have heard the sound of footsteps, loud cursing, and bottles breaking. There are also reports of shadowy figures within the trees.