Ripley’s Believe It Or Not! Hosts Sword Swallower 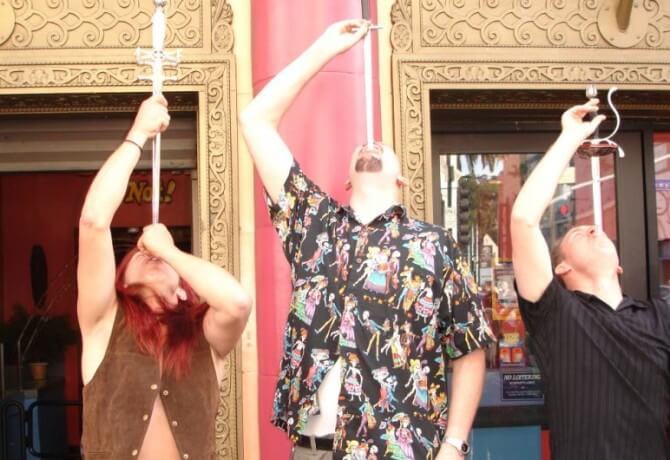 On February 23, sword swallowers from around the world will be putting on free shows at nearly 20 Believe It or Not! Odditoriums worldwide. In Wisconsin Dells, sword swallower Harley Newman will perform a free show in the lobby of the Ripley’s Believe It or Not! Odditorium, located at 115 Broadway. The show will start at 1:30 pm with an official “swallow” at 2:23:13 p.m. to coincide with the 2/23/13 date.

“We established World Sword Swallower’s Day to honor this ancient art and recognize the few people in the world who can do this,” explains Dan Meyer, a sword swallower whose amazing feats have been chronicled by Ripley’s Believe It or Not!. “We also raise awareness of the contributions sword swallowers have made to the fields of medicine and science and raise money for esophageal cancer research.”

Ripley’s Believe It or Not! has a long history of highlighting the death-defying achievements of sword swallowers – going back 80 years.
“Sword swallowers were a big part of the very first Ripley’s Believe It or Not! Odditorium at the Chicago World’s Fair in 1933,” said Tim O’Brien, VP of Communications for Ripley Entertainment Inc. “There, three performers, two of whom were women, mesmerized the huge crowds. Ripley’s has been home to sword swallowers around the world ever since.”

People can also try swallowing a sword on their own – virtually – thanks to the new Ripley’s Believe It or Not! app which features iSword. This cutting edge technology allows users to test their lightning-fast reactions and nerves of steel to score points and freak out their friends, all on an iPhone, iPad or iPod touch. It’s all the fun without any of the danger! Instructions on how to use the app will be provided at each World Swallower’s Day event so we can all swallow together!
For a large selection of high resolution images, please visit www.ripleysnewsroom.com/swordswallowersday2013.

The art of sword swallowing began more than 4,000 years ago in India, and requires the practitioner to use mind-over-matter techniques to control the body and repress natural reflexes to insert solid steel blades from 15 to 25 inches down the esophagus and into the stomach. With the demise of the traveling circus sideshow over the past several decades, there are currently less than a few dozen full-time professional sword swallowers actively performing the deadly art around the world today.