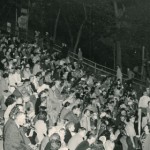 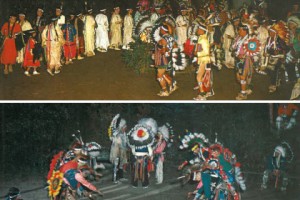 While Stand Rock had been the traditional Winnebago gathering place for years, the show was originally created with the tourists’ curiosity in mind. Visitors to the Wisconsin Dells area were enamored with its beautiful rock formations and rich Native American history. The entertainment at Stand Rock began shortly after World War I when a group of Winnebago Indians began running short ceremonies on the beaches of the Wisconsin River as the paddle-wheel steamboats tied up at the landing. Captain Glen Parson, one of the
steamboat operators, noticed the visitors’ interest in the ceremonies, and arranged for seats to be placed nearby. Working together with the Winnebago tribe, Captain Parson helped organize a Pow-Wow which was held for a few short weeks during the summer months.

The Ceremonial, designed by Phyllis Crandall Connor, was first presented in 1929, and remained under her direction for the following 25 years. Chief Daybreak was the master of ceremonies and Chief Evergreen Tree was among the featured artists. The Ceremonial showcased the dances and sounds of various tribes. In 1942, the Harold B. Larkin Post 187 of the American Legion was invited to sponsor the ceremonial and they continued their sponsorship until assuming the operation in 1955. 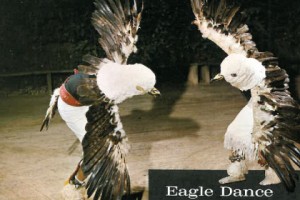 As the interest in the program grew, so did the need for a larger viewing platform and more dates. At its peak, the more modern-day natural rock amphitheater held 2,200 spectators. Each seat provided a spectacular view and was surrounded with amazing acoustics. They also extended their ceremonies from a mere two-weeks to nightly performances from July through August. 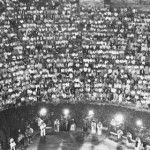 The dances were sensational; and the regalia… mind-blowing! Accompanied by various percussion instruments, the dancers were adorned in brightly-colored intricate costumes. The details shown on the costumes held special meaning to the tribes, and coupled with the movements, bared resemblance to various woodland and water creatures. The dances paid tribute to unwritten language passed down from generation to generation within the tribes. Though many of the dances at Stand Rock Indian Ceremonial were abbreviated versions of the originals, the audience watched in awe from beginning to end. The fast-paced War Dance was a favorite of many of the audience. If you visited Stand Rock Indian Ceremonial in the late summer months, you may remember The Green Corn Dance (a dance performed to thank the gods for a bountiful corn harvest). One highlight, the Swan Dance, is one of the oldest dances known to the Winnebago tribe. It is the belief of the Winnebago that the swan is a sacred bird created before man, and given wisdom that man had never received. Additional highlighted dances included the Eagle Dance, Dog Feast Dance and 15 more performances.

As time passed, many children continued to immerse themselves in the songs, dances and traditions of their ancestors. The Stand Rock Indian Ceremonial was on its fourth-generation of participants at the time of its closing in 1997.

We were saddened to hear the stand rock ceremonial dances are no longer performed at the Dells and have been wondering how we can still attend the native American ceremonials that we once enjoyed so much at the Dells in Wisconsin. Read somewhere that they are still performed between Baraboo and the Dells, but how can we find out exactly where?

Hi Judy,
From June 3rd to September 3rd in the Lower Atrium of Ho-Chunk Gaming, you can experience the Wasira Native Dance Show from 6pm-7pm. This is a free event. Contact Ho-Chunk Gaming Wisconsin Dells for more info at (800) 746-2486.