From Muskellunge to Walleye, the Wisconsin River is a World-Class Fishing Destination 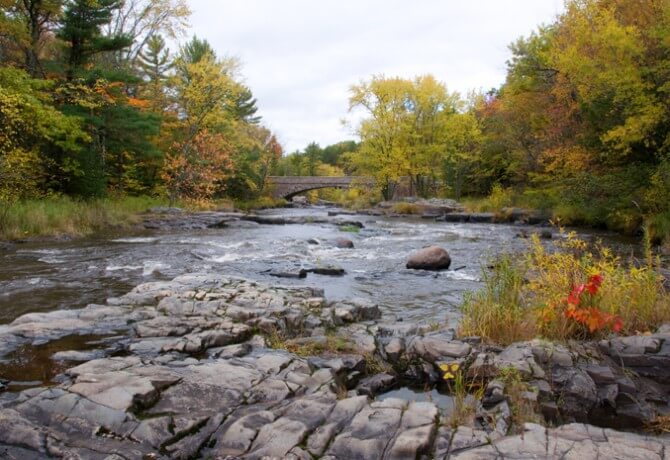 The Wisconsin River, that grand stream that snakes across a huge swath of the Badger State from Lac Vieux Desert to its mouth in the Mississippi River at Wyalusing State Park, is a stellar place for the fishing enthusiast. From Castle Rock Lake to the river mainstem, the Wisconsin Dells region is a prime one for anglers. What better place to shove off and wile away the hours on a lazy current, casting for world-class gamefish while enjoying the scenery of big pines, sandstone outcrops, and gurgling tributaries?

Here’s a casual overview of some of the major gamefish available in the region, from wiley walleye to gargantuan muskellunge. There are few better places in the Upper Midwest to alternate premium fishing with rest, relaxation, and lively entertainment. While you’re marveling at the sandstone monuments of the Wisconsin Dells, why not take to the mighty Wisconsin River and try your luck against some of the country’s most magnificent fish?

The snaggle-toothed walleye is a premier gamefish in Wisconsin. Spring and autumn are popular times to pursue them. These glassy-eyed fish favor murky or dark waters for hunting—and thus are most vulnerable to the angler in such conditions, whether on a cloudy day or during crepuscular hours. Active predators, they’ll tackle a wide variety of aquatic prey, from crustaceans to other fish.

The muskellunge is among North America’s most famous gamefish—the Wisconsin Department of Natural Resources calls it “arguably the most sought-after trophy in Wisconsin”—and a spectacular freshwater predator. A close relative of the northern pike, the musky is even heftier: A big one may be six feet long and weigh 70 pounds. Muskellunge may be mostly solid-colored, spotted, or vertically barred; this helps distinguish them from the northern pike, which sports horizontally lengthened spots. Armed with a heavy head and jaws, the musky is an ambush predator; along with feasting on a variety of fish, from perch to other muskellunge, this apex hunter will tackle muskrats, ducks, and other warm-blooded fare.

A musky favors the typical haunts of an underwater predator: drop-offs, the margins of sandbars and banks, the fringes of weed beds and underwater debris.

Northern pike, also well-distributed in the Wisconsin River, are sought year-round with live baits and spoon lures. They’re often active in colder waters, and can be aggressive antagonists on the line. The tiger musky, fishable in the Wisconsin Dells region, is a hybrid between northern pike and common muskellunge.

Lake sturgeon, crappie, bluefish, sauger, largemouth and smallmouth bass, and yellow perch are among the other gamefish regularly pursued in the Wisconsin River in the vicinity of Wisconsin Dells. Both channel and flathead catfish inhabit the region’s waterways, offering additional challenges—and the potential for delicious eating. Keep in mind that a huge diversity of fish inhabits the river downstream of the dam at Sauk City; the lower Wisconsin River, accessible to aquatic creatures in the Mississippi mainstem, supports an impressive diversity of fish common to the southern and western U.S., from paddlefish to longnose gar.

Considerations
Remember to comply with all up-to-date Wisconsin Department of Natural Resources fishing regulations, and consider the catch-and-release approach to ensure a healthy stock of future gamefish champions in these sky-blue waters.

Check out the placid waters of the Wisconsin Dells region today—you’ll be transfixed by them. Casting here comes with the possibility of hauling in a true monster—a muskellunge, a northern pike, a lake sturgeon—but, even more so, the promise of hours of idyllic communion with a stunning, water-laced landscape. This is the heart of rural, rustic Wisconsin, and the ancient practice of dropping a lure is one of the best ways to access it.

So, next time you’re considering Wisconsin Dells as a vacation getaway, consider structuring your trip around fishing: You’d be hard-pressed to find a region more amenable to the pursuit. Lock in to a slower pace and devote yourself to the study of riffles, logjams, marshy margins, and other fish neighborhoods.