Christmas Mountain put on another successful Winter Carnival this year on Saturday, February 1st! Endless activities and fun for young and old; everyone had a wonderful day full of laughter and memories on this perfectly sunny, winter Saturday.

The day kicked off with a wood splitting competition that was something to behold! This corner of the event was accompanied by a firetruck and a booth selling t-shirts and sweatshirts in memory of local Brian Gilbertson, otherwise known as “Gilly”, as a way to raise funds for his family. It was a heart-warming sight to see so many fellow firefighters, friends and family come together for such an important cause.

A new event this year and one that was definitely s sight for laughter was the cardboard derby races. Participants were required to get a sponsor and then make their “car” according to who sponsored them. Everything from a pink Miller Light box to a giant cardboard castle were in the competition for a creative display like no other. Spectators couldn’t help but cheer and giggle as adults and kids alike did all they could to propel their cardboard cars down the hill at lightening speed.

Calling all dog lovers! Breeds of every size and type were ready to show off their strength at the dog weight pulls. Small yet muscular bulldogs and large fluffy Alaskan Malamutes and Siberian Huskies alike competed. Some dogs did it for treats, others for kisses, either way it was incredibly adorable to watch them pull with all their might and revel in the congratulatory cheers and pats.

The most daring events of the day were the bikini/boxer ski races and the ski across the water competition. Racers donned only boxers or a bikini and their skis or snowboard as they flew down the hill while curving around markers, ditched their skis or snowboard, raced across the mountain and then reattached the ski or snowboard to finish in a speeding flurry! It took even more bravery to attempt to fly across a runway of ice-cold water. Competitors got a speedy start as they came zooming down the mountainside. Balance and weight distribution had to be dead on to make it across once hitting the water and a few succeeded! Employees were ready with blankets for those who didn’t.

The half-barrel toss was next where men, women and then kids attempted to throw an empty keg or half keg as far as they could. It proved to be much harder than it sounds! After that it was time relax and unwind with a marshmallow roast, torchlight parade and fireworks; the perfect ending to an incredible Saturday.

Many other exciting events took place during the day for a busy yet fun-filled day at Christmas Mountain! Keep an eye on their website and dells.com for more information on next year’s Winter Carnival. Don’t miss out on an unforgettable event for friends and families! 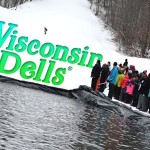