TIMBER! Dells Lumberjack Show in the Wisconsin Dells has been open for just 2 years, and is the perfect show for visiting families and locals alike! A mix of competition, comedy, and crowd involvement… this modern-day lumberjack show has folks of all ages engaged and excited throughout the entire 75-minute program!

The show bases its two lumberjack groups, Kilbourn and Newport, from the names of the two 19th-century towns that eventually became Wisconsin Dells. At the show, the audience is divided evenly among the two camps (the Kilbourn and the Newport) and helps to cheer their team’s lumberjacks to victory! The Wisconsin Dells was a huge hub for forestry in the 19th century. Long before the resort-style Wisconsin Dells was born, the dense forests and the wandering Wisconsin River created the perfect mix for a booming logging industry. The idea of “rafting” the logs downstream was a dangerous business, especially in the Upper Dells of the Wisconsin River with the tight turns and turbulence!

The Lumberjack Show features 12 events that take place on land, on the water, and in the air! From axe throwing to chainsaw carving, two teams battle head-to-head for bragging rights! It’s hard not to have your jaw hit the floor as you watch one of these lumberjack athletes speed-climb their way up a 50-foot pole and let gravity do the work as they make their way down. The log roll is another favorite among spectators. Participants try to master standing atop a spinning log without going for a swim in the water below (best 2 of 3 wins)! The 15-minute intermission between the land and water events is filled with an audience participation log-sawing competition!

Currently, the show is running with 6 lumberjacks (no lumberjills yet, hopefully soon) and 2 MCs. The manager, Cassidy Scheer is a lumberjack on the Lumberjack Show stage and in real-life! He has been a lumberjack for over 18 years! He’s won 4 world titles in speed climbing and 10 medals at the ESPN Great Outdoor Games and Stihl Timbersports Series. We asked him what his favorite event was, and with a quick response he said “speed climbing”. He’s joined by Tyler and Logan Alden, Evan Armour, Ryan Pawlish, and Willy “Boy Wonder” Vandenlangenburg! It’s easy to see that they put on a show, stay in-shape, smile, make people laugh, and LOVE their jobs! If you come to have a favorite lumberjack throughout the show, have them sign a “cookie” (small tree cross-sections) and get your picture taken with them after the show!

We would like to send out a huge thank you to the crew at the Dells Lumberjack Show in Wisconsin Dells. This summer, they gathered food for the local pantry on June 11th & 18th. For the events, they opened their doors to employees of the Wisconsin Dells. The drive was originally set for only June 11th, but with an outpouring of community support, they decided to add another. All-in-all the events raised 1734.5 pounds of goods for the shelter! Way to go guys!

You won’t be disappointed by attending one of their daily shows. So head on over to Dells Lumberjack Show and see for yourself if the Kilbourn or Newport lumberjacks come out on top! 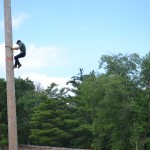 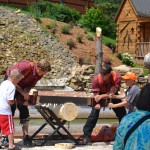 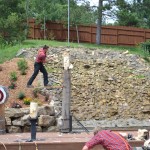 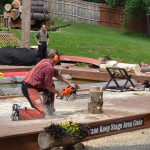 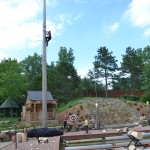 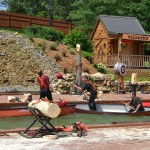